It’s not called turkey feast! Repeat it’s not called turkey feast! Can you believe it? In fact Greggs have gone down a very different path from everyone else this year. White bread instead of malted brown? Toasted? Pulled turkey? That’s almost hipster, except pulled meat is old hat now. It became old hat the day Subway started doing pulled pork that was in a block that you could slice like a loaf. Or when my mum ordered it as an extra on a burger. Old news. But at least it isn’t the same sandwich as everywhere else.

Also, I was very impressed with the level of service in Greggs earlier. By the time I got there, the shelves had pretty much been stripped bare by the hungry masses. When I asked if I could get a Christmas lunch toastie, the nice lady went out the back to see what she could do and lo and behold she knocked up the fabled sandwich for me. She must’ve recognised me as the guy writes a Christmas sandwich review blog on the years he can be bothered that is read by around 10 people. Fame has it’s benefits!

Now it is quite a cliché to say that fast food never looks like the photograph, but I think this sandwich does deserve a comparison with the publicity shot. 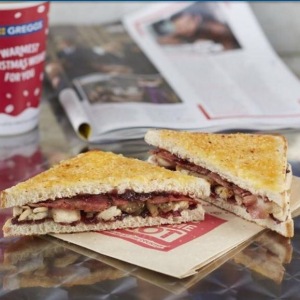 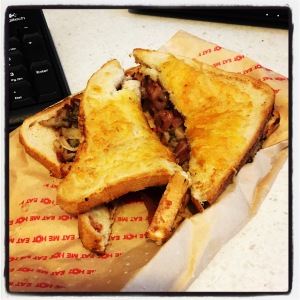 I don’t remember dropping the sandwich on my way home, stepping on it, slipping over with the sandwich flying into the road and getting run over by a bus before being tossed around by a hungry dog, but perhaps I knocked my head on the way down to the ground. The picture below is how the sandwich looked when I got it home. Greggs’ Christmas lunch toastie is definitely using it’s best photo from a few years ago as a Tinder photo. Maybe it has a great personality or a cracking arse that makes up for it. Let’s find out…

Being a toasty that was in a bag for it while in the cold December air, it is a bit greasy. But I can look past that! The cranberry relish is pretty overpowering, perhaps almost too much, but the various gooey cheeses and crispiness of the toast definitely add something to this. As a toastie, this is very good and has given me some ideas for post-Christmas lunch experiments, but I just don’t know if it’s a good Christmas sandwich. No proper stuffing, melted cheese, it’s just not quite right. Worth trying though.