Well, I’m in Canary Wharf again and I decided today’s the day to got to Eat. So I went to Eat. And it is now Veggie Pret. Which I hadn’t noticed for around six months of being in Canary Wharf twice a week. I noticed the Veggie Pret when it opened, but never realised that it had replaced Eat. Is it just in Canary Wharf? Or have Eat gone bust? To be honest, I simply cannot be bothered to find out.

But this is all fine, I’m in Canary Wharf and there are thousands of food options. But not thousands of sandwich options. Sure, there are thousands of Prets but most of the other food places specialise in over-priced salads or other “healthy” options. There is Costa, but I genuinely hate going into coffee shops just for a sandwich and it was packed to cunting point with coffee arseholes. There is also Paul, but please see the previous point. And I haven’t seen a Starbucks but again see the Costa points. So, there I stood in Canary Wharf like a lost child unsure of what to do next. And then I remembered Boots.

Fun fact: if you go to the family planning section in the Boots at Canary Wharf, there are loads of vibrators on the shelf! I guess they help reduce pregnancies if you just spend the weekend strumming yourself whilst watching Ben Shepherd on Tipping Point. Pretty ironic that they stopped using ‘Here Come The Girls’ on their adverts and started stocking these. What an ad campaign that would’ve been!

The Boots in Canary Wharf is also one of the busiest shops in the whole world (I think, there hasn’t been a study on this to my knowledge) but the queue moves pretty quickly because everyone is only buying one sandwich, one box of Lemsip or a couple of vibrators, so problem solved and here we are. 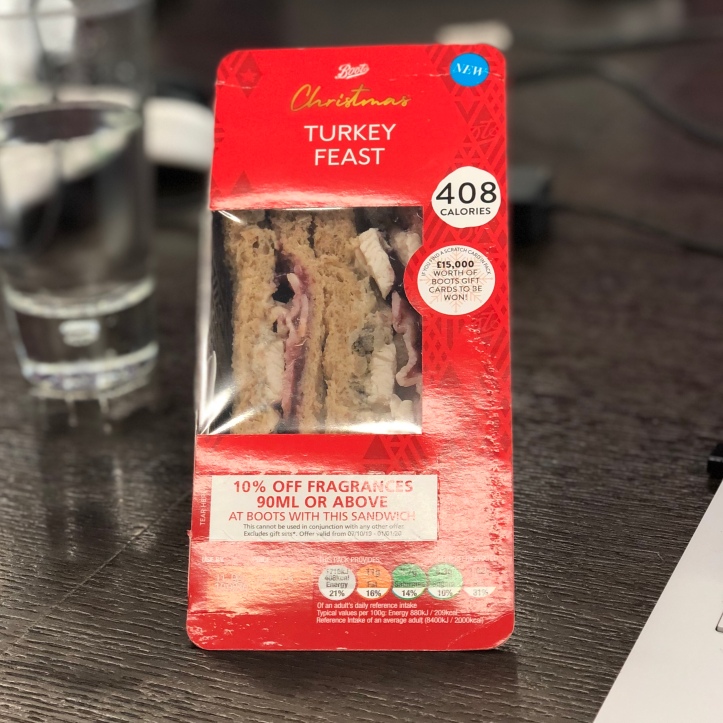 This is good! The bacon is very smoky (which we all know I love), the stuffing is great and there’s a nice little hit cranberry pulling it all together. I feel like all of the sandwiches are good this year. Maybe it was the year off turkey sandwiches, maybe it’s the fact there isn’t spinach in everything, or maybe it’s just the past six months of eating mainly food that isn’t mainly made of fat and salt, but I’m enjoying myself again.