Four pounds fucking something! I forget the exact price. To be fair, in the age of contactless I normally don’t remember how much anything under £30 costs (as an aside, why have Halifax blown a lot of money on the rights to Ghostbusters to advertise contactless payments that we have all used for years, the fucking pricks?). But today it’s because a sandwich in a box cost me over £4 and it has broken my mind and I went into shock as my card touched the reader and have forgotten key moments in my life, including my wedding and the cost of this sandwich.

Why is it so expensive? Is it the pumpkin bread? Go through the ingredients list up there again – look how much pumpkin there is already. Does the bread have to be made of pumpkin as well?! Or have sandwiches shot up in price overnight because of the mess that is Brexit that you morons voted for? Speaking of Brexit…look at that name – Vegan Winter Sandwich. That’s why you voted out, wasn’t it? Because we can’t say Christmas anymore. And it was all worth it. We’ll be living in burnout cars and eating each other’s children but at least you can put the word Easter on the bloody easter eggs! But vitriolic half-joking aside, Starbucks really has gone for the most Guardian approved Christmas sandwich name I’ve ever seen. You either need to hide the word vegan or include the word Christmas.

Back to the ingredients, my gammon faced chums. I last had a Starbucks Christmas winter sandwich two years ago. And back then, they stuffed too much random shit in it. Have they done it again? HOLD ONTO YOUR HATS AND SCROLL PAST THE PHOTO. 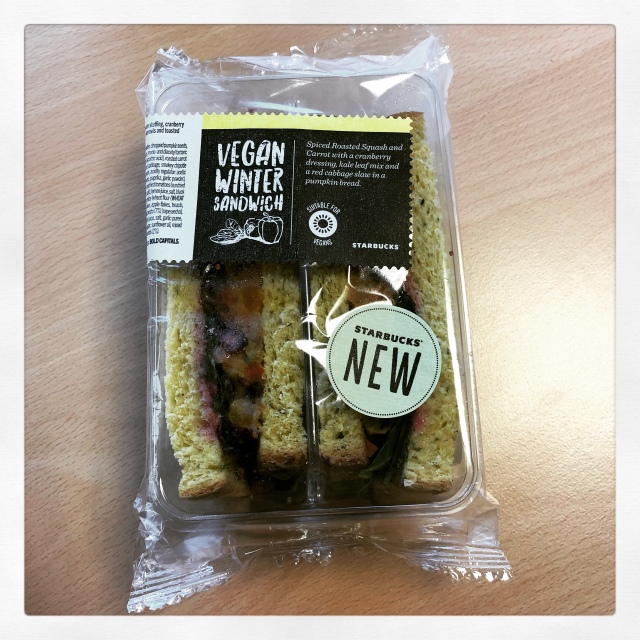 Well, I thought it would be more mush. And it is. But it is not as mushy as Pret’s vegan effort. On the flip side of that, the pumpkin bread is very dry, like an old cake. But, through their powers combined, they compliment and offset each other. Two wrongs don’t make a right but here they have. The smokey chipotle slaw and the 4,000 different spiced pumpkin elements also give the sandwich quite a kick. And unlike the sandwich from two years ago, the ingredients all come together really well. But just as you’re thinking “hey, this is a pretty good sandwich”, you remember that you spent four pounds fucking something on a sandwich. With bread that is like a stale cake. And no meat. There’s that (what I think might be a) myth that being vegan is more expensive than traditional eating, and with this sandwich, any true vegan really is getting a bad deal. But fuck em, they’re vegans.