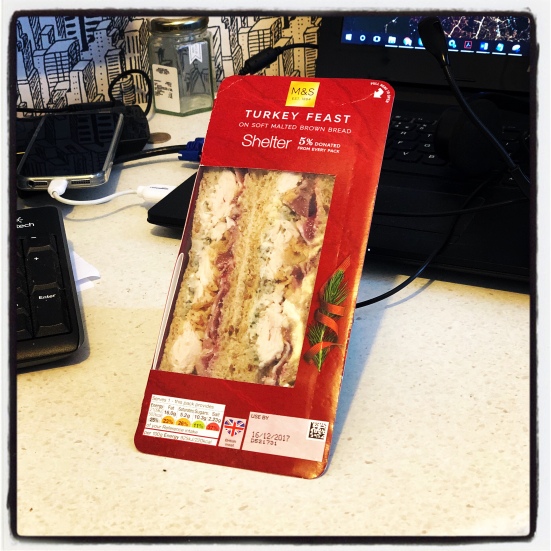 Well today’s the day. The day I had to go to M&S and have a hug with the Big Issue lady.  I got some cash together and just before accepting my fate, I tried one last time to avoid it – I went to Greggs first, but they had no Christmas sandwiches of any kind, toasted or otherwise. Not even labels for them! So I resigned myself to getting hugged. To be clear, buying a big issue and having a slightly awkward chat I don’t mind. When you see the same person a lot, that just happens. I used to work in a library and there was seller who worked outside so I’d talk to him everyday and buy an issue every month. It’s the hugging. I just don’t like being hugged, by pretty much anyone. Get off!

So I ducked into M&S, got my sandwich and braced myself. But today there was no hug. It’s bloody freezing outside and she was sat down and wrapped up, and offered a hand for a handshake. Now this I can deal with! But then as I shook her hand, she pulled it towards her and kissed it. Whilst I say that I find hugging awkward, this was definitely a million times more awkward. I felt like a complete douchebag. So there you go, there’s your story, hope you liked it. And I have a nice Christmas copy of the Big Issue to read at my leisure.

I also have another sandwich to review! Like Co-Op, M&S have gone for the same as last year but added fried onions. In fact, except for the cranberry sauce being called cranberry chutney, the list of ingredients is exactly the same as Co-Op. Is there some sort of Christmas sandwich conspiracy going on here? Are they the same sandwich? The proof is in the sandwich, so lets eat!

Okay, they are not the same sandwich. You can hardly taste the onions in this and, unlike the Co-Op, you can really taste the cranberry sauce. Sorry: chutney. But neither of these things are the issue with this sandwich, there is a much bigger issue: sage. Oh boy is there a lot of sage in that stuffing! Which I kind of like, but it does overpower everything else. If you don’t like sage, you’re gonna hate this.

If you do like sage and you’re going to get this, I also recommend the Festive Trio –  a selection of little festive sausage rolls. There’s a goat’s cheese and caramalised onion one, a turkey and cranberry one and a three bird roast one! Very good. Go on, add it to your lunch.

17 Sandwiches That Were The Same As Last Year. You Won’t Believe Number 6.

This Man Jumped Into The Thames After Eating Christmas Sandwiches Every Day And People Are Going Wild.

PUBLIC SERVICE ANNOUNCEMENT: There will be no blog on Monday because I am being banished to the deepest depths of the nether realm (Slough), but I will be going to a major London train station and plan to stuff my bag with any sandwiches I can’t buy locally. It might be a bumper week next week! Or, of course, it might not.