I wasn’t going to bother with the Christmas sandwich blog this year. It originally started as an ironic comment on people posting photos of their food online and the fact that no one just ‘experiences’ things any more, they have to review them. The internet has made everyone ‘creative’ in the most banal ways. And it doesn’t get more banal than reviewing your pre-packaged lunch at your desk. Plus the Guardian had beaten me to it and have actually paid someone to rank this year’s sandwiches already!

But some people have actually been asking if I’m doing it this year. And more than just one! This might be another layer of irony on an already confused piss take that become serious, but I don’t know what’s going on so HERE WE GO AGAIN! 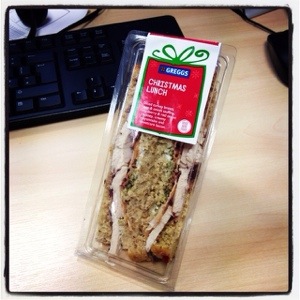 So I originally planned on going to Pret today but the queue was ridiculous, leading me to the next sandwich shop from the office – our newly refurbished Greggs. Now you can eat in at this one! Take your wife for a nice romantic sausage and bean bake. Then take her to Greggs.

This years *NEW* Christmas Lunch is pretty much the same as last year except it has sage and onion stuffing instead of pork and sage and a much fancier chutney instead of cranberry sauce. It looks as grey as John Major but what does it taste like?

Maybe I’m a bit over-excited because it’s my first sandwich of the season, but it’s good. It’s got the basic and it’s got them right. Maybe the turkey and the bacon are a bit bland, but the moist combo of that stuffing and relish and the slightly homemade feel of it tastes just like Christmas. That’s 2013 off to a good start.