A BONUS REVIEW! WRITTEN EXCLUSIVELY ON MY PHONE! You lucky buggers. I am in Bath for Christmas and it’s Christmas Eve and I am currently being dragged around the same women’s clothes shops and coffee shops that are in London but here they are completely different! Oh wait no they’re not. Oh well, you all get something out of it. I think. You’re probably not reading this anymore because work has finished, and my one email subscriber is in Bath with me. Oh well let’s get on with it.

You know how every panini tastes like boiling hot cheese and crunchy bread? No matter what the filling is? Well imagine that with a bit of cranberry. Boring. UNLESS you get a mouthful with stuffing in. Then it tastes like cheesy stuffing, which isn’t right but is pretty good. Like that website you look at when your wife is out. No not that one, the one you only look at occasionally and then try not to look at again for a few months because if you look at it too much there’s definitely something wrong you.

Okay, okay, here’s a big list of the sandwiches ranked in order. I know the more autistic readers among you will not enjoy Christmas without it. And just to be clear, this is the definitive list. No arguing. Don’t @ me.

And so for another year, I just wanna say…good…bye…

Well the fun is over. And I think it’s fair to call the blog international now, look at these stats for December:

Now, because millennials who grew up with Labour government sports days where every one is a winner might be using this sandwich blog as a safe space, this year I will not be ranking the sandwiches, but granting every sandwich an award so no one gets left out.

Turkey and Maple Bacon by Starbucks

The Popeye Award for Too Much Fucking Spinach:

The “I Can’t Believe It’s Not Bacon” Award:

The “Might Have Won If It Was A Sandwich” Award:

Most Shameless Attempt to Cash in on Christmas:

The Colonel’s Christmas Burger by KFC

WAIT A MINUTE, WHO’S THAT? IT’S THE COLONEL’S CHRISTMAS BURGER! WHAT IN THE BLUE THE HELL IS THAT DOING HERE?! OH NO! GOOD GOD ALMIGHTY! RING THE BELL, STOP THE DAMN BLOG!!

Today is a sad day. It will be a surprise to some as I have never, ever mentioned this to a single person before today for some reason, but I’ve always considered [dead celebrity] as a major influence on the person I am today. I think of [dead celebrity] in everything I do, from how I try to carry myself as a person, how I interact with other people, to how I write my reviews of Christmas sandwiches on the years I can be bothered to write them. Whenever I face a problem in life, the first question I ask myself is “What would [dead celebrity] do?”. 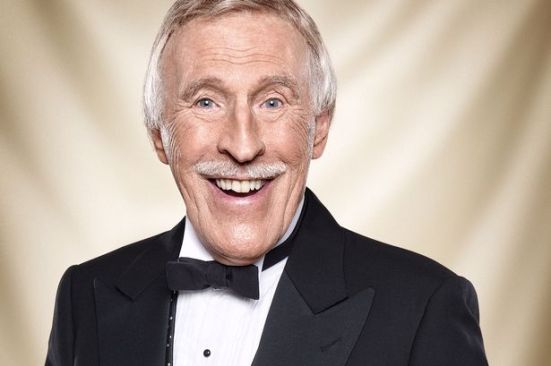 Everyone will have their own reasons for remembering [dead celebrity]. Earlier my 5-year-old daughter asked me “Daddy, will [dead celebrity] now be with [last dead celebrity] in heaven?” I just didn’t know what to say. How do I look her in the eye and tell her that another strong positive role model for women has gone in this age of toxic masculinity? I was literally shaking. There are no words. I can’t even.

I once met [dead celebrity] in an unlikely situation which unfortunately can never be verified but it really did happen, I haven’t just made it up for clicks on social media. I’d like to keep what happened between us as it’s what they would have wanted, but I can say that they showed great generosity and human spirit that day. A great example of a celebrity giving something back, I’m sure you’ll agree. Please email me if you would like to interview me and use this example in a national news publication or broadcast.

Love them or hate them, [dead celebrity] was a true leader in their field and a massive influence on the industry as a whole, to the extent that their fame transcended beyond what they were originally famous for. They will be eternally missed, far beyond [current year].

As a mark of respect, there will be no Christmas sandwich review today.

Add another ‘fake news’ story to your list! Today I am actually out on my Christmas work do and I lined this up yesterday. Yes, it was another double sandwich day for you, my loyal readers. I was actually only buying this sandwich, but I popped into Tesco on the off chance and they had Christmas sandwiches, so that went up yesterday. Lucky for you guys, huh? Although now I have officially reviewed all sandwiches in the local vicinity so maybe your luck just ran out punks. Or maybe I have something planned for next week. You’ll just have to wait and see.

DISCLAIMER: I don’t like maple syrup. There I  said it. I don’t know why, I just don’t. Which is a fine reason for not liking something, so stick it up your chuff. Nonetheless, I am eating this for you. Yes, you. Not any of the other readers, it’s just you and me baby, riding off into the sunset shoving sandwiches in each other’s mouths you sexy pig.

Well the first thing I noticed is how fucking sweaty it is! There’s a further level of packaging in the box and the sandwich is sweating it’s bollocks off in little individual plastic cases for each half of the sandwich. But strangely it isn’t soggy.

The next thing I noticed is that the outlandish combination of ingredients tastes different to anything else I’ve had this festive holiday period. And to be honest, I don’t get it. It’s not horrible, but it definitely tastes like someone rammed the leftovers from a thanksgiving dinner into a sandwich. But that’s not a good old fashionsed British Brexit Christmas dinner is it tho? In fact this is the opposite of the Tesco sandwich. And nothing says ‘Britain in December’ quite like a sandwich that hardly makes any effort and somehow gets away with it because everyone will have forgotten come January now let’s go get pissed. 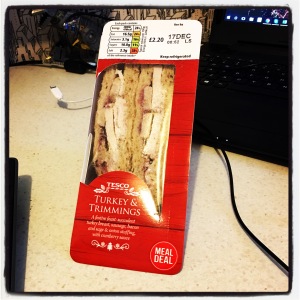 After yesterday’s M&S selection round-up, some loyal readers accused me of running out of ideas and turning into an old hack. Well hack on this, jerk offs! My Tesco had some Christmas sandwiches in stock today. Why didn’t they have any Christmas sandwiches or any evidence of stocking Christmas sandwiches the other day? I guess this is another one of those questions that man is not supposed to answer.

So I have to admit, I’m disappointed that Tesco have also called their sandwich Turkey & Trimmings. I thought the Co-op was a shoe-in for the Best Name Award. Once again, there are no original ideas.

It’s a bit grey and this is reflected in the pretty simple taste. In fact it feels like quite a lazy effort from Tesco. It’s not a terrible sandwich, but it really does feel like they’ve done the bare minimum. And some people are happy with that, coasting through life with no real aspirations or goals, accepting life as it comes to them. And you know what? I imagine they are some of the happiest people on the planet. You can push yourself, try to reach the top and create a legacy that will be remembered, but all you get is a novelty sandwich blog that you end up putting far too much effort into.